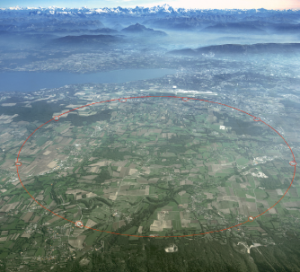 From recreating the universe in its early moments to acting as a tool for biology, medicine, environment studies, material science, industrial processes, forensic science and even art, particle accelerators have much to contribute to science. Most of the elementary particles have been discovered by colliding accelerated particles. Experiments by J J Thomson in 1897 led to the discovery of the electron; the discovery of the proton is credited to Ernest Rutherford in 1918; and the discovery of the neutron is attributed to Chadwick in 1932. Looking “deeper” inside matter requires more and more energetic particles and therefore more powerful accelerators.Currently those machines, such as the LHC in Switzerland or SLAC in the US, are kilometres long and able to increase the energy of particles up to velocities close to the velocity of light. These energies are sufficient to hit the subnuclear particles inside an atom and release their content (constituent particles and bonding forces) to complex particle detectors. The “bullets” of accelerators for exploring material are small charged particles, normally electrons and protons and their anti-particles as well as ions (positively charged atoms).

In conventional accelerators, particles are accelerated by electric fields that are travelling with the particles close to the speed of light. These electric fields are created inside a vacuum pipe using intense microwave radiation and can attain up to 50 million volts (around 230 000 times the typical household supply voltage) per metre before electric sparks create a plasma that will damage the accelerator’s internal surfaces. Although this seems to be a huge number, it takes kilometres to accelerate elementary particles close to the speed of light. Plasmas are able to sustain electric fields up to 1000 times higher than conventional accelerators. Therefore, plasmas have the potential to reduce the length of a particle accelerator by the same factor, reducing the cost and the complexity of the facility. In 1979, T Tajima and J Dawson proposed for the first time the use of intense laser pulses to create laser-plasma acceleration. Since then, several acceleration mechanisms have been identified that are able to generate laser-based sources of electrons, protons, ions, neutrons and X-rays. At the base of the acceleration mechanism is a force exerted by the laser pulse on the plasma electrons, called the ponderomotive force that points outwards the laser pulse. 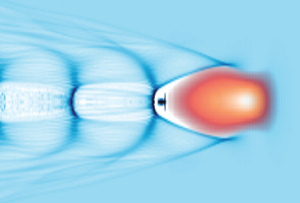 Electrons are mostly accelerated by plasma-waves created by this force. By choosing the appropriate laser pulse length, the resonant response of the plasma will form the accelerating structure that will move in the wake of the laser (wakefield) and accelerate the electrons. To achieve this, the laser requires very short laser pulse durations (usually less than 100 fs, the time that light takes to travel 0.03 mm) and laser energies above 1 J. The laser technology to reach this power was available only in the early years of 2000, after the development of a laser amplification method, called chirped pulse amplification technique, developed by G. Mourou. The acceleration mechanism for the other particles (protons or general ions, neutrons and X-rays) is slightly different and is driven by the electrons. Because the laser is able to displace electrons within a target (either solid or gas target) it can create charge separation states and hence very intense electromagnetic fields.

Sketch of a conventional Free Electron Laser, where electrons undulate within a sequence of magnets, producing coherent radiation

There are many applications of particle accelerators. For example, probing the inside of atoms can reveal the fundamental laws of the universe. The huge machines and facilities that are currently necessary for that could potentially be replaced by more compact and therefore cheaper laser-based accelerators. Scientists are also investigating the possibility of using laser-based electron accelerators as injectors for facilities generating X-rays – so-called free electron lasers (FELs). These facilities are able to provide a very bright source of X-rays that is able to make very precise, quick “images” of a dynamic evolving process. FELs can be used to image molecules or particular states of chemical elements and would therefore provide an array of information for all kinds of biomedical and nanotechnological applications. A laser-based source would be able to reduce the length of the accelerator tunnel from a few hundred metres to a few tens of metres !! 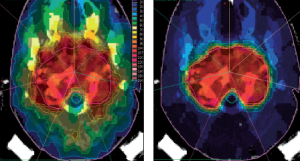 Image of a brain irradiated with X-rays (left) and protons (right) in order to cure tumors located in its inside. The proton irradiation shows a much more localized irradiation

But smaller particle accelerators are also widely used in medicine, for example for the treatment of cancer. For this, X-rays, electrons or protons are used. However, the most effective form of tumour treatment is proton therapy, which takes advantage of the fact that protons deposit their energy very locally and at the end of their motion (Bragg peak). This is of great benefit compared with other particles (e.g. X-rays) that are currently used for therapy. The energy deposition of protons can be precise up to the millimetre, making it possible to irradiate the precise location of a tumour, leaving the surrounding healthy tissue intact and allowing the treatment of difficult areas such as the eye, brain and spinal cord. To apply the therapy, protons are energized to specific velocities that determine how deeply in the body they will deposit their energy. Unfortunately, due to cost limits, only about 40–50 facilities worldwide are available to deliver this sort of therapy, which means that their current capacity is vastly outnumbered by the number of patients seeking treatment. Using compact lasers could mean greatly reducing the size (and costs) of these accelerators and transporting systems. Currently, the necessary particle energies cannot be reached by existing laser facilities, however strong effort is put, including by our group, for achieving the required energies and set up a first prototype of such an accelerating structure. 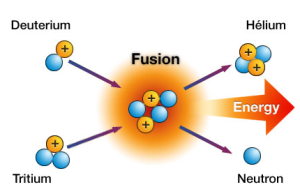 Sketch of the Fusion reaction

There is another application regarding protons that scientists were thinking of in 1992 when they first discovered laser accelerated protons: fusion and using protons as an energy transfer medium to heat the ignition region. Laser-generated protons can generate a very intense beam and the combination of several proton beams with different energies can reach different penetration rates in the ignition region. Furthermore, relying on their unique spatial property of being much more laminar than beams generated by conventional accelerators, laser-based proton beams can be used in radiography, producing images with high spatial resolution.

Because protons are sensitive to electric fields they are able to probe electric fields, detecting details of a few microns (0.0000001 m) on a picosecond (0.00000000001 s) timescale. However, for probing thicker targets higher proton energies than are currently obtained by laser-acceleration would be needed. Laser-generated protons with increased energy could be used to probe thicker materials and generate a high resolution, high time-definition movie of changing processes and electromagnetic fields. 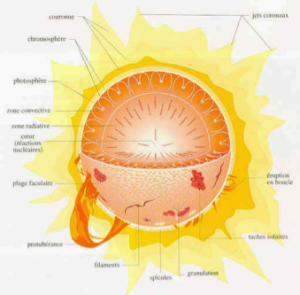 Sketch of the Sun with its different layers and energy sources

Besides applications of protons in medicine and health, high-energy laser-generated particles are an unique tool for the recreation in laboratories of “exotic” states of matter that usually do not exist on earth but do exist, for example, on the Sun. Using lasers, temperatures of more than 15 000 °C can be reached in a laboratory for a very short time period (tens of ps, 1 ps is 0.000000000001 s). Studying matter under these conditions provides important information that is useful for solving a variety of problems, not only in astrophysics (matter in the planetary cores) but also in fundamental physics (dense matter at the frontier of plasma physics). Our research is contributing to enhancing these conditions and allow deeper studies in this field.

A more recent application of proton acceleration concerns spallation. Spallation processes are one of the main possibilities for transmutation of radioactive material (isotopes), i.e. the transformation of long-life radioactive isotopes into more stable short-life (less then 30 years) isotopes. Of current interest is the use of spallation for the treatment of nuclear waste because it is a way of “neutralizing” the radioactive material, and therefore making it harmless. This process requires very high proton energies that are currently difficult and expensive to reach. Only one facility is currently dealing with this problem in the US – the Spallation Neutron Source (SNS) – with a second one in construction in Europe (the ESS, in Lund). But those energies are still far from the energies that we can generate. Our effort is however contributing to enhance the advancement of the analysis and technology linked to this topic.

Sketch of the transmutation process

Besides these topics, our group is investigating many otheraspects and applications related to laser-driven particle generation that can be found in the dedicated pages.